Home » Hope and faith at the frontiers of COP26: Sharing the journey for change towards climate action and justice for Oceania and Asia

Hope and faith at the frontiers of COP26: Sharing the journey for change towards climate action and justice for Oceania and Asia 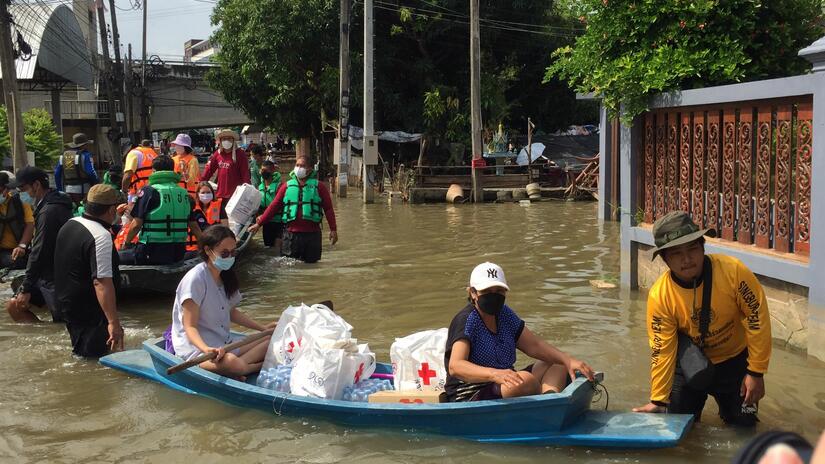 How can faith communities call for climate justice and push for accountability towards transformative change?

During the event Faith at the Climate Frontiers: Consequences for Oceania and Asia organized by Ecojesuit and the River above Asia and Oceania Ecclesial Network (RAOEN) in Glasgow on 8 November, Ecojesuit COP26 delegates shared voices and actions and exchanged stories and learnings from the corridors of COP26 and the streets of Glasgow, from Oceania and Asia, and how these are laying the basis for COP27.

Ecojesuit Global Coordinator Pedro Walpole SJ opened the conversation and reminded all that the frontier at the moment is Glasgow, that the hope referred to is not optimism given the pessimism and the disappointments, but there is still the need to go forward with faith, which is a tough love. “We are called to live with a deep faith, capable of sacrifices, to call for justice, and to share a lasting hope and a definite change.”

Directly sharing from Glasgow, Reverend James Shri Bhagwan, General Secretary of the Pacific Conference of Churches, shared a brief update on the COP process and the format of the negotiations, expressing his dismay on the lack of representation from the Pacific Islands.

Yet, amid the difficulties and frustrations, James drew hope as he joined the Pacific bloc during the Global Day for Climate Action on 6 November, where over 200,000 people flocked to the streets of Glasgow, demanding climate justice and action. H also emphasized that while pledges and commitments on paper is a crucial element of the COP process, it is important to keep pushing for transparency, accountability, and inclusion in the implementation process.

Ann Marie Brennan, Vice President of the World Executive Council of the Christian Life Community and the event’s moderator, proceeded to share her experiences after joining the “Growing our Future” pilgrimage from Edinburgh to Glasgow led by Jesuit Missions UK. The group largely consisted of young people who journeyed 52 miles and witnessed firsthand the beauty of Creation in the countryside that they passed by during their journey. “In the Book of Psalms, it says ‘let all the Earth rejoice!’…and so we lift up our prayer that this can be done and carried through in the negotiations and we’ll take this into needed action,” said Ann Marie.

Siji Chacko SJ, Director of the Conference Development Office of the Jesuit Conference of India/South Asia, stated the need for more action and less blah, blah. He highlighted the socioeconomic and ecological impacts of climate change on the plight of local farmers in South Asia and how this contextualizes “the cry of the Earth is the cry of the poor.” With the huge presence of civil society, youth, Indigenous Peoples, and faith-based organizations in Glasgow, Siji reiterated the need for more collective action towards a meaningful global response to the climate crisis. “Let us be hopeful and draw hope within ourselves. The longest journey starts with the shortest step, and each one of us has a responsibility towards it,” he said.

From Broome in Western Australia, Jacqui Rémond, Co-Coordinator of the Ecology Task Force of the Vatican Covid-19 Commission, provided a succinct overview of the main points emerging from the COP26 discussions and the challenges and opportunities for engagement. Jacqui presented the following:

While these may sound promising, Jacqui reminded all on the need to exercise caution and fair skepticism over the commitments and pledges being made. For example, countries that widely patronize the fossil fuel industry such as China, India, and Australia, did not join the pledge to phase out coal. Financial institutions are making billion-dollar pledges, yet many of these institutions remain among the world’s top backers of the fossil fuel industry.

Compared to the gravity of the socioecological crisis, these commitments are certainly not enough. “We need to keep calling for urgent and ambitious climate action,” Jacqui stressed. “We’ve got a long way to go still, and we know we are running out of time”. She then emphasized the need for faith communities to keep calling for ambitious climate action and to advocate for the concerns of the most vulnerable, drawing from the teachings of Laudato Si’ as a platform for change.

Pedro Walpole responded to Jacqui’s inputs and remarked that these provide a very good rundown on the elements and also showed some of the weaknesses. As points for action, Pedro said that it is critical to monitor and that there is a need “to talk about forests because oil palm is not a good exchange for natural forests.” Regarding the coal situation, Pedro said it is in “shambles but there is a mark on the ground. It is the peg we must push deeper in the ground so we can push the next peg in, and we’ve got to do this with hope and with openness.”

Pedro stressed too that “we have to somehow get corporate transparency, as there is a great deal of hidden agenda. The people not seen are the corporations who have had their speak with the politicians. As we go through the COP process, we have to recognize that there are many negotiators bleeding in this, who are suffering. These are people that do not have an agenda of ‘business first.’ But this is the crux and we can’t let it slide as this has slid for too many years. This is already 27 years in the making.”

His Eminence Soane Patita Paini Cardinal Mafi, Bishop of Tonga and Niue and President of Caritas Oceania, discussed what the stories from Glasgow mean for Oceania and Asia. Recounting his 11 years of experience with Caritas Tonga, Cardinal Mafi highlighted the tangible realities he witnessed of people’s lives and livelihoods affected by climate change in the Pacific islands. Yet, despite the hardships and the disasters, the Church is steadfast in its mission in accompanying the most vulnerable with a sense of love, care, and joy for the human person and this is where the Church learns from the poor. Cardinal Mafi emphasized that starting from a change of heart towards conversion is fundamental, enabling one to see in the other the true face of God.

Mavis Tito, National Director of Caritas Papua New Guinea, stated the need for adequate representation of the Pacific Island States in the negotiations, being most vulnerable to the impacts of the changing climate. For decisions and actions to be made, voices from such communities must be heard. As leaders return to their countries, the conversation must continue while ensuring that voices of the most vulnerable are heard in the process.

Tebtebba Foundation Executive Director and former UN Special Rapporteur on the Rights of Indigenous Peoples Victoria Tauli-Corpuz shared how indigenous representatives in COP26 are actively trying to influence the decision-making process towards inclusion and accountability through the Local Communities and Indigenous Peoples Platform. She also emphasized the need to ensure the human rights approach to achieving mitigation, and to strengthen collaboration between faith-based groups and communities in monitoring. “With the communities we are representing and the faith communities, we need to join hands to systematically monitor how decisions are being made and to cry out loudly if these actions are bringing more climate injustice,” she said.

Archbishop Peter Loy Chong of the Archdiocese of Suva in Fiji and President of the Federation of Catholic Bishops’ Conferences of Oceania shared his reflection on how faith communities and groups engage themselves in addressing the challenges. He likened the mission of Christ to the mission of the Church in accompanying the suffering – the communities most vulnerable to climate change impacts and ecological degradation. Archbishop Loy Chong reiterated the need for a shift in the language of faith to communicate stories and amplify the local voices in a manner that touches the hearts of people to spark action towards conversion. “Unless we interrupt the hearts of people, conversion will not take place,” he stated.

Bishop Allwyn D’Silva, Auxiliary Bishop for the Archdiocese of Bombay, spoke on the role of faith communities and faith-based groups in sparking transformative change, and how the religious texts and teachings serve as a reminder of the Church’s mission in caring for the poor and caring for the Earth.

The journey to COP27 and with the youth

Pedro Walpole shared the key points from the sessions and stressed the need to push for accountability and greater accompaniment of the communities in the margins to ensure that their voices and concerns are heard in the preparations for COP27 next year.

COP26, despite the setbacks and challenges, has made efforts to echo the voices and obtain a greater understanding of the struggle for human rights of those suffering from the impact of a changing climate, and these are meaningful bases for engagement.

The role of faith is crucial as this is where the hope and the strength to continue and sustain the commitments to change are drawn, exploring and experiencing together how a communal and interfaith response can strengthen the voices and actions from Oceania and Asia, following a process of synodality and solidarity.

And finally, there is a need to continue being committed to the youth who are telling us what is now, what must be changed, so they too may participate and celebrate, and become co-creators in the wonderful work for the Earth.

Faith in the Climate Frontiers: Consequences for Asia and Oceania was held at the Ignatian Spirituality Centre in Glasgow with in-person and virtual speakers on 8 November and aligned with the COP26 theme for that day on Adaptation and Loss and Damage. Over 100 participants from faith communities, local Church leaders, community representatives, and interfaith networks from different parts of the world, joined the Ecojesuit-RAOEN event.

Mary Criselle Mejillano works as a Programs Management Associate with the Environmental Science for Social Change (ESSC), a Jesuit research and training organization in the Philippines that provides secretariat and technical support to Ecojesuit. Criselle also helps coordinate the Ecojesuit networking activities and is a member of the virtual Ecojesuit COP26 delegation.

This story is also available in French and Spanish.