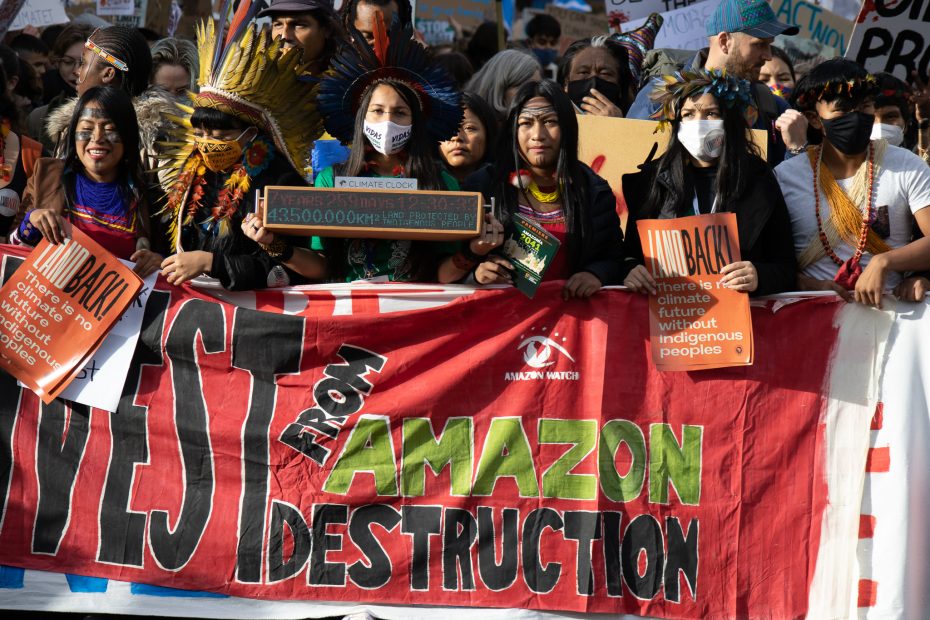 The theme of COP26 negotiations in the Blue Zone on the sixth day is Youth and public empowerment: Elevating the voice of young people and demonstrating the critical role of public empowerment and education in climate action. Whether by coincidence or design, it also happens to be a Friday, and there is a massive Fridays for Future – the global movement of school climate strikers – protest march in Glasgow.

Travelling to Glasgow on the train from Edinburgh, I met students from Heriot-Watt university who are writing their banners for the march. They tell me that they represent the students’ union, not the university itself, which they don’t think is serious about climate action. When I ask why, they mention that it gets funding from oil companies so can’t be seen to speak out against fossil fuels. I don’t know whether this is factually accurate but it’s interesting that they feel a disconnect from the institution and have little faith in its integrity about climate issues.

Mistrust and disillusionment with leadership is a theme later on when I meet a man who is disgusted with the amount of vehicles that US President Joe Biden brought with him for his stay, filling four cargo jets with cars and even more with helicopters. Again, this is hearsay but I like to know what catches people’s attention.

The march is starting at Kelvingrove Park, a beautiful green space just down the hill from the University of Glasgow, where tomorrow’s Global Day of Climate Justice march will begin. I’ve positioned myself at a crossroads on the march route, closer to the city centre so that I can see the march from the front. It’s a slow build-up, with police everywhere and a helicopter overhead.

It’s clear from the crowds of people making their way towards the park that this march is going to be huge. There are people of all ages making their way to join the crowd, from families with young children to seasoned campaigners. I see three older women with a Greenham Common banner between them, protesting with the young people. Finally, we see the crowds coming towards us.

The first group on the march had an eye-catching globe with a thermometer in its mouth, and were anti-meat protestors with the slogan Less Meat = Less Heat. Hard to argue with, but not really who I expected to be leading this parade.

Far more interesting and welcome were the group of indigenous people from Central and South America. This COP summit has been accused by many attendees, including Greta Thunberg herself, as being too white and elite, so it is a welcome sight to see this group of people, representing so many countries and ethnic groups that are affected badly by climate change, at the front of the march.

With that in mind, I am looking forward to the event being run in a few days by our colleagues in Ecojesuit, who are also present at COP26. The event which will be online on Monday, 8th November at 8.30am (Irish Time), is called Faith at the Climate Frontiers: Consequences for Oceania and Asia. It will share the voices from these regions on the challenges they are experiencing from the impact of a changing climate.

The climate march ends in George Square in Glasgow where there is a rally and speeches. I can’t stay for those, but I am glad I witnessed the march itself, and hope it is only a fraction of the number of people we will see at tomorrow’s march.

Martina Madden is the Communications Coordinator at the Jesuit Centre for Faith and Justice (JCFJ) in Dublin, Ireland, and her story is originally published in JFCJ’s COP26 Diaries.